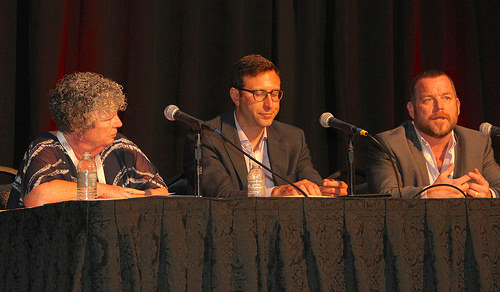 With the same three states offering iGaming as for the past two edition of the iGaming North American conference, and few legitimate prospects, the focus of this year’s conference became the one remaining interactive gaming opportunity left: eSports. Some of the statistics about eSports are astounding. Chris Grove of LegalSportsReport.com said eSports is a $5.1 billion industry. At its height, daily fantasy sports was around $2.5 billion, so is eSports the most important secret in gaming. According to Seth Schorr, the chairman of Fifth Street Gaming, which operates Downtown Grand Las Vegas, it is. Schorr has been producing small eSports tournaments at the property that have been remarkably successful. “Vegas has a unique opportunity to position itself as the destination for eSports,” he said. He points out that MGM is using it as a spectator sport, scheduling a massive eSports tournament for next weekend. But the potential for eSports is as a betting vehicle, which it is not at the time. Grove says the worldwide wagering numbers for eSports is now on a par with rugby and Formula One racing, so it’s an untapped reservoir. Grove anticipated eSports leagues—and there are more than a dozen professional leagues, with over 150 teams—getting licensed by Nevada gaming regulators. Integrity isn’t an issue, he said, for two reasons. First, the leagues have much at stake and wouldn’t risk their status. Second, the same data that prevents match-fixing in other sports would also be applied with eSports. “It’s always possible,” said Grove, “but like with other sports, the lower you go on the professional ladder, the more problems you are likely to have.”